How I Work: Jeff

This is the second installment of How I Work at the DSI. DSI-HIW was adapted from Lifehacker’s great series also called “How I Work”. Questions have been adapted/changed/substituted for more academic subjects.

Jeffrey McClurken is Professor of History and American Studies & Special Assistant to the Provost for Teaching, Technology, and Innovation at the University of Mary Washington.

The Dell is the main thing I get my work done on. I bring it to meetings, I take notes on it. The phone is also with me. Having two offices, everything gets forwarded to my cell phone. The Android tablet I got mainly to experiment on. I thought I was too much in iOS and got it to see the Android OS. Most of my consumptive time is spent on the iPad. That’s what I use at home.

One word that best describes how you work: Constantly 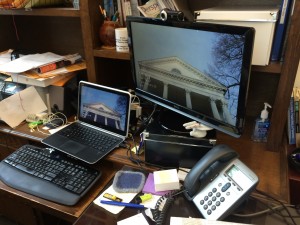 What apps/software/tools can’t you live without? Why? Evernote. Because it’s the catch all for everything. It’s where I brainstorm stuff, it’s where I put meeting notes, and the fact that it syncs across all of those devices means that I always have access to those notes. I use teuxdeux – it’s a website that has an iOS app – for my todos. It’s very simple. It’s not free anymore but it’s become so central to my process. It’s where I manage everything – both personal and business – if it’s not in that to do list then I lose it. I use Outlook for some calendaring at work. I use Google Calendar as my default calendar so we can keep our family organized. I use CompanionLink to sync Google Calendar to Outlook.

What’s your best grading time-saving shortcut? I’m always on the lookout for the next best one. I have been enamored recently with Canvas’ SpeedGrader. When I don’t need to do a line-by-line edit but to capture basic categories of evaluation, rubrics set up in speed-grader really helps.

What’s the most creative assignment/class activity you’ve ever designed? Did it work? It did! But I’ve had some that didn’t. I teach a two-semester women’s history course. After talking with Chris Kilmartin about the courses, I redid the assignments for the second half of the class  – which had been a research paper – and set up a three stage process. The goal was to recreate a class from Mary Washington at some point in its past. The students were split into groups. Each had a decade: 30s to 60s. Students went in the archives and researched what students lives’ were like during their decade. They blogged about that and then set up a research website for each decade. We voted on which site they wanted to use and they voted on the 1950s. The class was split up again to plan the recreation itself: some set up academics, another group looked at material culture, another did then/now photos from campus. We recreated a history class from 1952 called “Current History”. We used the readings from class as the basis. Our debate topic for the day was  “A woman’s place is in the home”. We recorded the whole thing. They were able to contextualize all the stuff they had done and reflected on readings of the time. It was a ton of work and we worked the entire class around it but it ended up being one of the best things I’ve ever done.

How do you manage scholarly journals/books? Do you use a citation manager? I use Zotero when I’m doing scholarly research. When I’m gathering resources for teaching or my new position, I tend to use social media tools. I use feedly as my reader and have set up IFTTTs. Some goes to Pocket and then gets published to a Tumblr, which I use as a repository on stuff I want to follow up on. Any link I post to Twitter or Facebook gets added to a Google Spreadsheet. It includes the link and any text in the post.

Do you blog about your teaching/research? Why/why not? I do. Not as much as I should, probably. I have done it at the Chronicle and at Techist. For me, teaching should be an open process where what we’re doing should be transparent to the students. There’s no reason for us to reinvent the wheel. My teaching should all be as public facing as much as possible.

Besides your phone and computer, what gadget can’t you live without and why? I have a Pebble smart watch. I don’t know that it rises to the level of “I can’t live without” but I have to take it off and charge it occasionally. And if I forget to put it back on, I definitely miss it. I use it as a pedometer. It has a sleep monitor. It helps me track how long and how well I sleep. It’s a good wakeup call for me to make sure I get to bed earlier. And it’s got notifications and cool apps.

What’s the best advice you’ve ever received? I’ve been fortunate to have received lots of good advice over the years. I am the teacher that I am in large part because my wife is a teacher as well. Jen and I spend immense amounts of time talking about teaching. For twenty years, she has pushed me to take students’ voices and desires and goals seriously. It reoriented the way I approached teaching. Seeing students not as passive receptacles of knowledge but as active, powerful, creative actors in the process. It’s an approach we don’t typically hear about in graduate school.

When did you last have to go to a physical library and how did you feel about it? I love libraries. I love the smell of libraries. I love the hushed quality of the stacks. I walk through ours all the time because it’s next to the ITCC. However, we are at a tipping point. There are moments when it’s just as easy to find books via Google as it is in the physical library. Still, I am more likely to go to my public library than I was 10 years ago. [Part of that is because of my children and their voracious reading habits.]

Where do you learn about new digital resources/apps? I have a robust social network on Twitter and to a lesser extent Facebook. I subscribe to Wired and Lifehacker and Profhacker and I check out the grants that the NEH and other agencies give out to see what’s coming down the pike.

How do you take notes at meetings? I mostly use Evernote. I also have a Moleskine notebook that is specially made for project management. It keeps track of the date and to-dos that come out of a given meeting.

When’s the last time you rinsed your coffee mug? I just did! (Note: Jeff had both a Contigo travel mug and a regular ceramic mug on the desk)