Home » Courses » You are reading »

If this is a blog post, then it’s my very first blog post.  I am not a blogger.  E-book builder is probably the best way to describe me and my digital work.  I build on-line books / manuals / tools my students use in the undergraduate courses I teach.

Builder of on-line books?  Yes, builder, creator, maker  – all three words apply.  The point is I do more than write the content of my books.  I like to learn how to use at least some of the tools it takes to create the things I make.  In the digital world, this means that to the extent I can and have the time to do so, I write the markup – the HTML and the stylesheets that drive the layout and presentation of the content of my e-books.  I no longer depend on content management and presentation software, such as WordPress or Drupal, or commercially-available layout themes, at least not entirely.  And while it has been a while since I wrote original script, something I used to do, I incorporate specific Javascript snippets and JQuery packages to drive the menus and the more dynamic aspects of my books.

The e-books I have been working on over the past many years are best described as on-line laboratory manuals, which I affectionately refer to as OLMs.  I have built or am in the process of building three on-line laboratory manuals:  Cell Biology OLM, Histology OLM and Proteins OLM.  These manuals, each of which is at a very different stage of construction, are packaged in a suite I call the Biology OLS, a suite of on-line laboratory manuals for undergraduate biology.  Proteins OLM is the baby.  It is in a prenatal stage of development.  Cell Biology OLM is the most finished of the three.  It benefits from the 15 or more years I spent developing Histology OLM, the first of the three manuals.

Histology is the study of biological tissues, in this instance, the study of animal, vertebrate, mammalian tissues.  Histology has always been an image-rich discipline, with atlases of color photomicrographs of tissues filling the bookshelves of histology and pathology professors and students.  The development of a digital collection of images, in the form of a lab manual designed to be used along-side the microscope to guide students through the microscopic examination of tissues, was a natural. 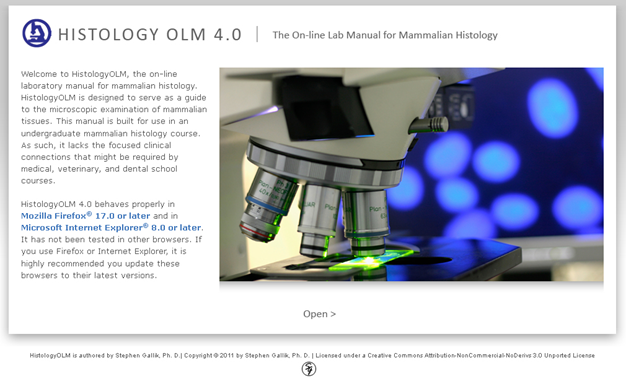 The first version of the histology lab manual I created was a conventional software application, developed using Microsoft’s WebBrowser Control® and distributed on CD for exclusive use in the mammalian histology course (Biol 331) at Mary Washington College in 1999.  The WebBrowser Control brought html-based document viewing and hyperlinking to this strictly client-based, off-line application.

Version 3.0 of the manual was developed using Drupal, making it compatible with both Internet Explorer and Mozilla Firefox®.

The current version of the manual, version 4.0, is not driven by Drupal.  It is built entirely on original markup, customized stylesheets, Javascript and Jquery packages.  It is compatible with the latest versions of Google Chrome, Mozilla Firefox ® and Microsoft Internet Explorer ®.

Recently linked to the manual is an independent UMWblogs site, histologyolm.umwblogs.org.  Developed and implemented with the help of Tim Owens, Department of Instructional Technology, this WordPress-driven site is being used and has been used over the previous two years by enrolled students to post pictures of tissues each has personally taken in the histology lab.  The assignment for each student is to find and photograph important structural features of specific tissues and organs, post these photographs to the site and write about them, thus creating a student’s personal electronic atlas. 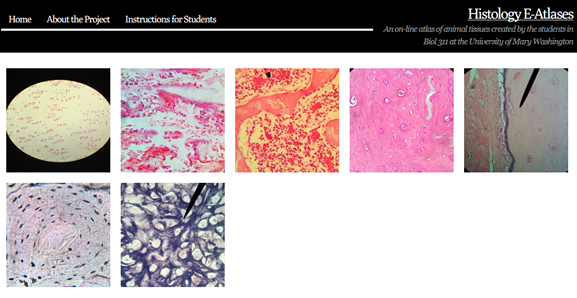 The production of student e-atlases has been a no-brainer in terms of the intended educational benefit.  The project provides students with opportunities to develop their basic microscopy skills, their scientific writing skills and their understanding of the histological details of specific tissues.  But the implementation of the project has been an on-going logistical experiment, and it has taken several years of trial and error to make the process low-cost, efficient and student-friendly.  Students now use their wifi-connected smartphones to take quality pictures through the microscope’s eyepiece.  After each picture is taken, it is immediately posted to the blog site through the use of the easy-to-use, freely-available WordPress app installed on the student’s phone.   Students leave the lab session with their photographs taken and posted in a seamless, time-efficient way.  They go home to add thoughtful (hopefully) descriptions of each photograph to each post, resulting in a set of e-atlas entries.  The added cost to the University for implementation of this project is nil, and the added time it takes for each student to take each photograph and post it to the blog site is 1 minute tops. 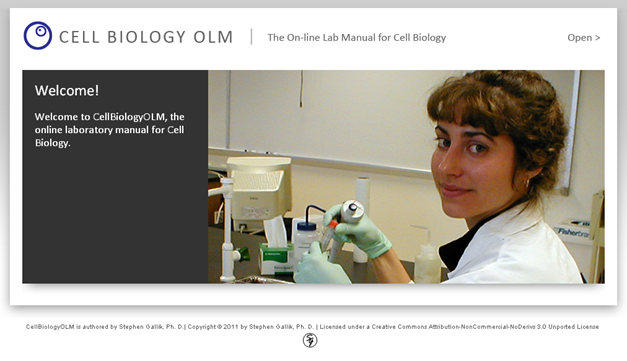 The laboratory exercises contained in this manual are designed to reinforce students’ understanding of some principles that govern cell function, give students a working understanding of some basic laboratory techniques used in cell biology and biochemistry laboratories, serve as models for how experiments are designed, and finally provide students with some experience collecting and recording data, basic data analysis, basic descriptive statistics, and the use of electronic spreadsheets in displaying, analyzing and graphing data.

Proteins OLM is the least developed of the three lab manuals.  It has yet to be unveiled.  It is being developed less as a lab manual and more as an encyclopedia of proteins.  Once it is operational, each entry in the encyclopedia will contain technical information about a protein’s structure, the biochemistry and mechanism of function of its active site and its family ancestry.  Unlike the other lab manuals and more like the histology umwblogs site, Proteins OLM is being built as a WordPress-driven umwblogs site.  Each entry will be researched and developed by a student enrolled in my Biol 433 on-line course as part of a semester-long research project.

I need to thank many people for the help they provided and continue to provide during the development of these digital works. I would especially like to thank, in alphabetical order, Martha Burtis, Jim Groom, Patrick Murray-John, Tim Owens and Andy Rush.  I would also like to acknowledge the financial assistance provided by a grant from the Center for Teaching Innovation, University of Mary Washington.